Sutton racks up his fourth race win at Silverstone 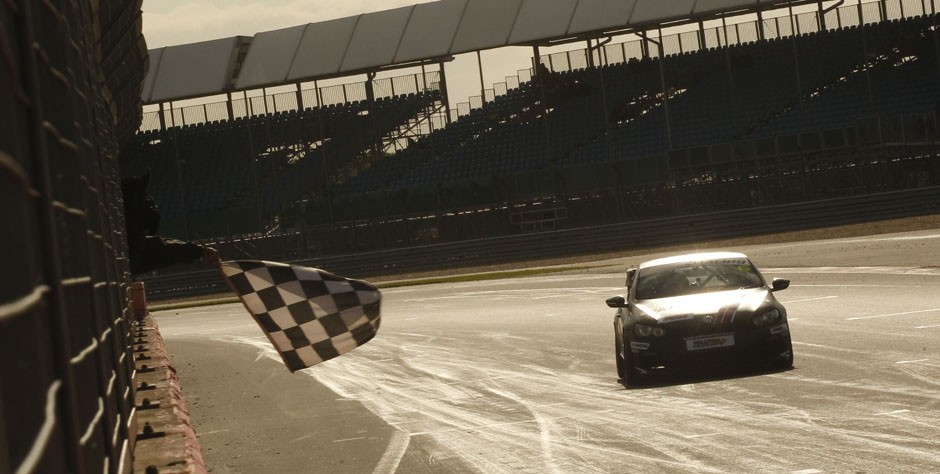 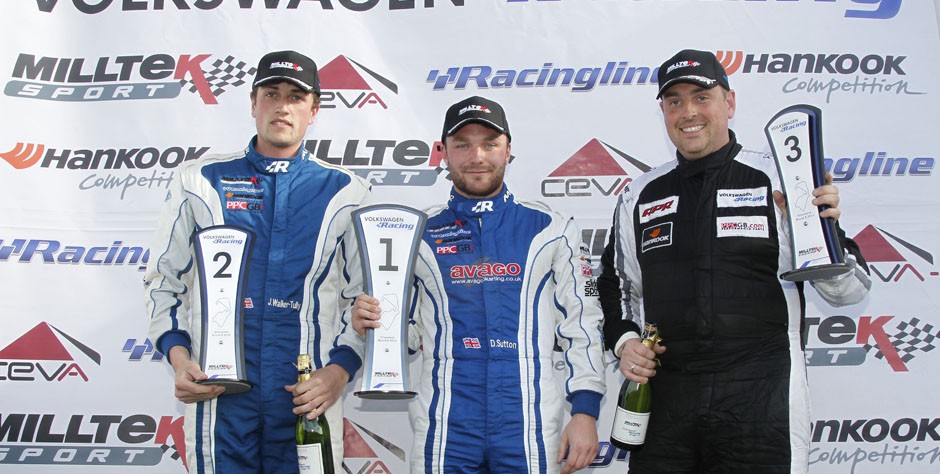 David Sutton further extended his Milltek Sports Volkswagen Racing Cup championship lead this afternoon with a lights-to-flag victory in the SlideSports Scirocco at Silverstone, his fourth of the eight-race season. But while Sutton delivered his flawless performance, all eyes watching trackside and on TV were focused on the monumental three-car fight for second place which raged for the duration.

Sutton took advantage of relatively slow getaways from front-row men Jack Walker-Tully and Aaron Mason to nip through for the lead at Copse corner, building his advantage to 0.4s by the end of the opening lap. None of his pursuers would come as close again…

Battle for second was joined between Mason, Walker-Tully and Phil House from the outset, 2013 champion Mason using every trick learned during his six previous seasons of success in the VW Cup to make his AWM Scirocco as wide as possible. Walker-Tully tried at virtually every corner for the first four laps to hustle his Cooke & Mason Scirocco past, losing third as a result for a brief spell to the PH Motorsport Scirocco of House before regaining the position.

On the fifth lap the Scirocco men ran three abreast down the Hangar Straight towards Stowe, with Walker-Tully finally able to nail second spot on the inside as they rounded Club. Jack managed to pull a slender gap on Aaron, who in turn was now under heavy attack from Phil. After two laps of having his attacks rebuffed, House managed to get a better exit out of Woodcote to draw alongside Mason down the National Pits Straight and into Copse, where he managed to make the move stick and secure second. It was a brilliant display of close-quarters racing from all three, and all achieved with a minimum of contact.

Sutton crossed the line 2.4s ahead of his squabbling rivals, with Walker-Tully building his advantage over House to 1.4s by the flag. A disappointed Mason was just 0.7s adrift of a podium finish…

Winner David Sutton: “I got a fantastic start and managed to get Aaron into the first corner, around the outside, and from there on I saw that the guys behind me were battling so I did one fast lap to pull away and then settled into a rhythm to bring home the car, which ran faultlessly. Unfortunately the budget is now spent and I need to find more if I am to defend my lead at Spa next month. If that was my last race, at least I have ended on a high.”

Jack Walker-Tully, second: “After the nightmare of qualifying, today has been a dream. I was happy with sixth in the wet but to be up there and to have the pace for second in that race was tremendous. It was a really good battle, one of the best races I’ve had, really close all the way.”

Sutton’s SlideSports team-mate Chris Panayiotou ran fifth throughout the race after getting a great start from ninth on the grid but just lacked the pace to get on terms with the battlers ahead of him. Chris equalled his best result of the season so far, and finished well ahead of sixth-placed Tom Witts (Maximum), who got the better of a three-way battle with Joe Fulbrook and Lucas Orrock. Orrock held sixth going into the penultimate lap but was tipped into a spin by Fulbrook as Joe attempted an optimistic down-the-inside manoeuvre. Race one victor Fulbrook lost out to Witts on the final lap and had to settle for seventh.

After the electrical dramas which cost Howard Fuller his first-race front-row start and which led on to his retirement, the Team HARD driver had a point to prove and made it in style, storming from the back to finish eighth, just ahead of Orrock. Michael Epps was on a mission also, following his team-mate Fuller’s example to scythe through from the rear-end of the grid to 10th at the line.

From 18th on the grid to 11th at the line was a good result for Cobra Engineering Scirocco driver Joe McMillan. Graham Ewing kept a determined Simon Rudd at bay on the final lap to secure 12th spot, with Lee Christopher making up for the disappointment of crashing out on his debut to take 14th. Matthew Wilson claimed his best result of the season with 15th in the Complete Racing/KPM Golf.

There were no Golf gremlins this race for Laura Tillett on her way to 16th, just ahead of Paul Dehadray, whose 17th earned the JWB Motorsport driver the Sportsman’s Trophy for the first time this season. Simon Tomlinson, Phil Morris and Mark Smith completed the top 20.