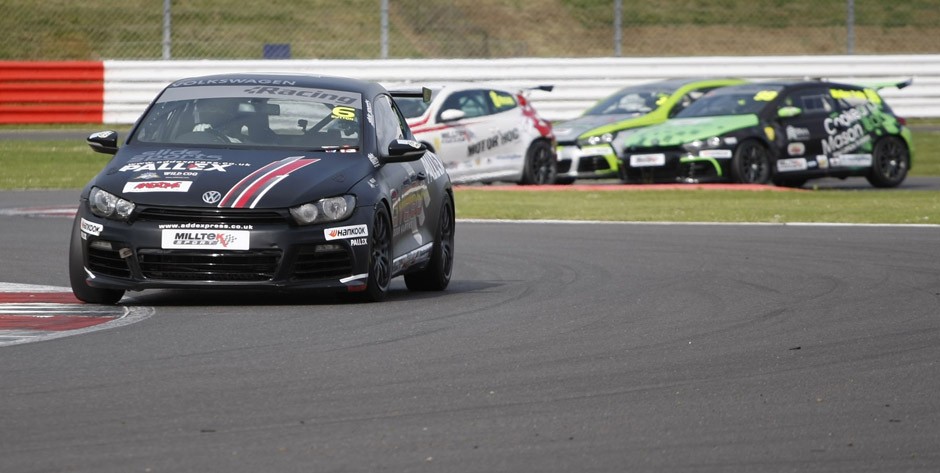 After a month’s break since they competed at Silverstone, the Milltek Sport Volkswagen Racing Cup contenders will be in action on another Grand Prix track this week (10/11 July) – the Belgian circuit of Spa-Francorchamps, a venue which can always be relied upon for unpredictable weather as well as for providing close and exciting racing.

With four wins under his belt already from the opening eight rounds, 25-year-old Rotherham racer David Sutton leads the pack to Spa with a 30-point championship advantage; whether he can maintain that lead in Belgium will depend on how well his SlideSports-prepared Scirocco can adapt to the extra weight imposed on it since its late-May Silverstone win. In addition to 60kg of regular success ballast, Sutton’s DSG semi-automatic gearbox equipped car will carry a further 40kg after a revision of the championship rules.

The drivers hoping that Sutton will be slowed sufficiently for them to be able to keep pace include those closest behind in the championship – 2013 champion Aaron Mason (AWM Scirocco) and reigning title-holder Joe Fulbrook (Safe & Sound Golf GTI). Adding spice to proceedings, neither Mason nor Fulbrook – the two men with the most VW Cup race wins – has ever tasted victory at Spa.

The only driver on this year’s grid to have won in Belgium is KPM Racing/Vindis Scirocco pilot Lucas Orrock. Spa was in 2014 the venue for Lucas’s maiden (and so far only) car-racing victory, and last season’s championship runner-up will be hoping for a repeat, and that an ankle injury sustained while on holiday last week will not hamper his progress.

Despite a technical exclusion from one of the Silverstone races, Team HARD’s Michael Epps has moved into the championship top 10 in his maiden season of saloon racing, and hopes for more success in Belgium: “It is a track which I feel should suit me, and I feel that the team has made some worthwhile improvements to the Golf. We are going there with strong hopes for some podium finishes.”

Epps returned to Silverstone last month to compete in the VAG Trophy; he topped qualifying and won both races. “There was a lot of flak after the Silverstone VW Cup weekend so it was good to go back there and to be able to prove a point. It was good to return with a proven completely legal car and to go just as quick as the VW Cup race winners. I think our technical problems are resolved. I have never raced at Spa – my only visit there was in 2004 as a kid to watch the F1. I’m really excited about it; it is one of the best tracks in the world in the mind of most drivers. It is also prone to rain there, so it should make for an interesting weekend.”

Prior to this season Epps’s track experience was in single-seaters, but he has quickly settled to front-wheel-drive tin-top racing: “We all go into a championship with hopes and dreams but the reality is that it’s a learning experience. I definitely feel really at home in the car now whereas earlier in the season it required more thought to drive it. Now it’s very comfortable…”

Twenty-four-year-old Laura Tillett will be with a new team at Spa – the talented karter joins SlideSports alongside Sutton and Graham Ewing, and will campaign a Mk VI Golf GTI prepared by Mark Jenkins’ team. Disabled racer James Pile returns with SlideSports for a one-off outing in his Golf.

In addition to Orrock’s Scirocco, KPM will be fielding Golfs for Phil Morris and Matthew Wilson, while the AWM/Safe & Sound team will have championship returnee Tim Snaylam on the strength alongside regulars Simon Tomlinson and Simon Andrews. Jack Walker-Tully will be making his Spa debut in the Cooke and Mason Scirocco, while the JWB Motorsport team’s Sciroccos will be in the hands of Paul Dehadray and Pete Littler.

The Spa weekend gets underway in traditional style on Thursday evening with a parade from the circuit along public roads into Stavelot village square. Qualifying follows on Friday morning with the races – slightly longer than the UK norm at 25 minutes apiece – on Friday afternoon and Saturday morning.