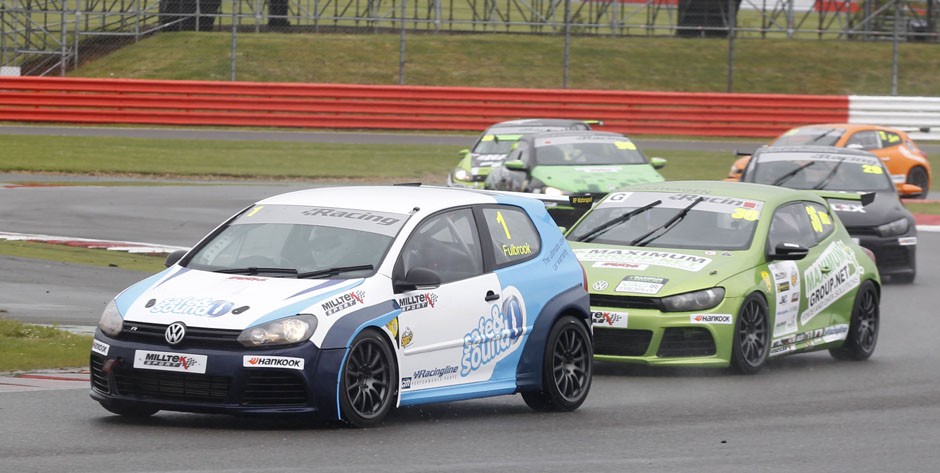 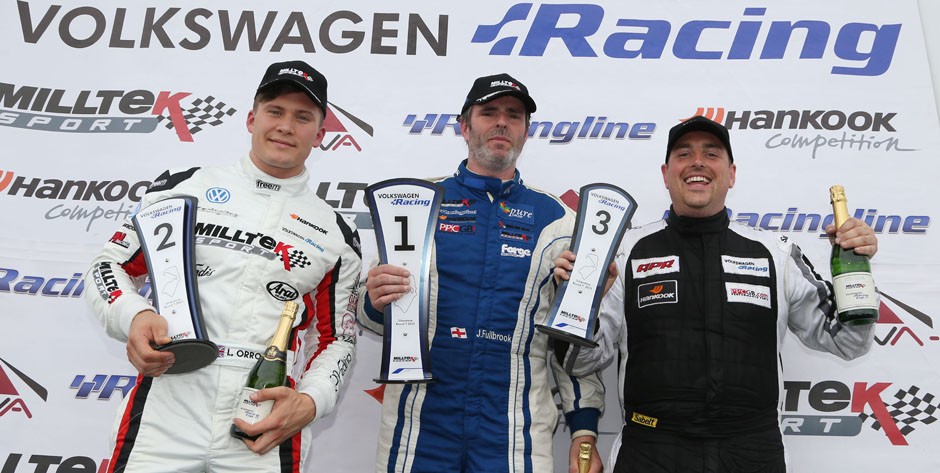 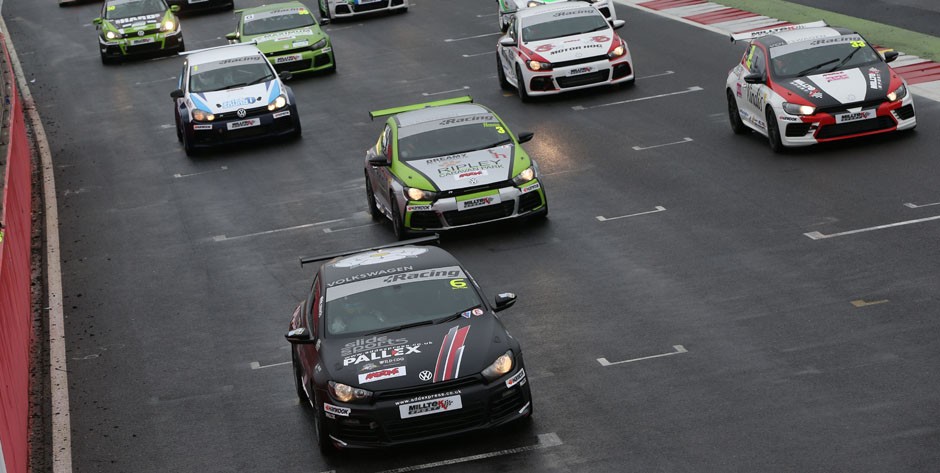 Reigning champion Joe Fulbrook and his Safe and Sound-backed Golf GTI mastered the tricky wet conditions at Silverstone this morning to score their maiden win of the Milltek Sport Volkswagen Racing Cup season. It was Joe’s first wet-race victory since 2009 and the first of the year for a Golf after six successive Scirocco triumphs.

Fulbrook took command on the fourth of six laps around Silverstone’s 3.7-mile Grand Prix circuit, championship leader David Sutton having led initially before handing the baton to Lucas Orrock. KPM Scirocco driver Orrock held on for second place, his best finish of the year, ahead of Phil House, who made it to the podium for the first time in nearly two years.

Dry and sunny weather for Saturday’s qualifying session meant that all 29 starters were running ‘best-guess’ chassis set-ups for the vastly different conditions of the race, and Sutton, who led the length of the opening lap, thereafter found his SlideSports Scirocco a handful. Orrock, who made up two positions on the opening lap to slot in behind the leader, took advantage of Sutton’s discomfort at Village on lap two, with David pushed back to fourth by the end of the lap by Aaron Mason’s AWM Scirocco and by Fulbrook.

“I got a really good start initially – I think others around me got a little more wheelspin than me – but then I missed third gear and slipped back,” said Lucas. “Then everyone else seemed to brake really early for the first corner and I just went right around the outside and got past Aaron again and came out second. I could see straight away that I was quicker than Sutton, had a little look on the first lap but backed out of it because it wasn’t worth the risk. Then I got into the lead a couple of laps later.”

Fulbrook’s Golf was clearly handling better than all the Sciroccos around him, and Joe seized second place from Mason at Club on lap four and then drove around Orrock for the lead at Brooklands later the same lap. “Joe came up on me and there was no point in trying to resist him,” said Lucas.

Fulbrook opened a half-second lead over Orrock by the end of lap four and eased away to beat him to the chequered flag by 1s. Said Joe: “Not bad for an old boy… Up to now we have always struggled to find a good wet set-up but the boys have found a bit of a sweet spot, and I’m really pleased for them. It was proper greasy out there and the tyres were going off towards the end, so I am well chuffed with that. I haven’t won in the wet since 2009.”

Orrock’s grip on second was boosted by a lock-up from third-placed Mason at Brooklands on the penultimate lap. “I nipped it up,” said Aaron, “and slid wide, but I managed to get back on…” Confirmed Orrock: “Aaron’s mistake gave me the breather I needed.”

Mason’s error promoted House to third, his PH Motorsport Scirocco rejuvenated by a recent radiator and intercooler change which, he hopes, have banished the overheating problems which have blighted him. Double champion House harried Orrock all the way to the flag but was unable to find a way past. He was delighted nonetheless to step back on to the podium for the first time since his 2013 Snetterton victory. “It’s just nice to finish a race with the same pace as I started with,” said Phil, “and especially to finish well in such a competitive, cleanly fought race.”

Sutton was pleased to retain fourth at the line, and with it his championship lead: “We struggle a bit in the wet; the set-up isn’t quite right and we have some work to do. I had no grip until the final lap, but overall I’m pleased with that position.” Mason recovered from his off to take fifth.

Rockingham double winner Jack Walker-Tully endured a disastrous qualifying session with a too-heavy Scirocco and started from 12th. With ballast shed for the race he made up four places on the opening lap and was delighted to make it into the top six by the end to net himself pole position for the reverse-grid second race.

Tom Witts, the current Mk 2 Production Golf GTI Championship leader, enjoyed a strong VW Cup debut to finish seventh in the Maximum Motorsport Scirocco, with Robert Barrable close behind on what was his first outing of the season in the THM Racing Golf. “We tried something with the set-up which didn’t really work and went backwards after a strong start,” said Rob.

Graham Ewing took 11th place in his SlideSports Golf, claiming the Sportsman’s Trophy for the second race in succession, with Mark Smith scoring his best finish of the season so far, 12th in the InFront Motorsport Scirocco, ahead of Pete Littler (JWB Scirocco), Simon Deaton (Maximum Scirocco) and Paul Dehadray (JWB Scirocco).

The youngest driver in the race, 16-year-old Damani Marcano, was another to score a personal best: 19th, just ahead of his Team HARD comrade Laura Tillett, who had to start from pit lane after power delivery problems on the warming-up lap. HARD runners Simon Rudd, Howard Fuller and Bobby Thompson were also in the wars – Rudd was tagged, spun and lost time before restarting to finish 24th and last, while Fuller and Thompson were both sidelined with mechanical issues.

They were joined in retirement by Simon Andrews and Lee Christopher, who came together on the opening lap after Christopher locked up his SlideSports Scirocco at the treacherous Stowe corner.