Epps streaks ahead in Spa qualifying 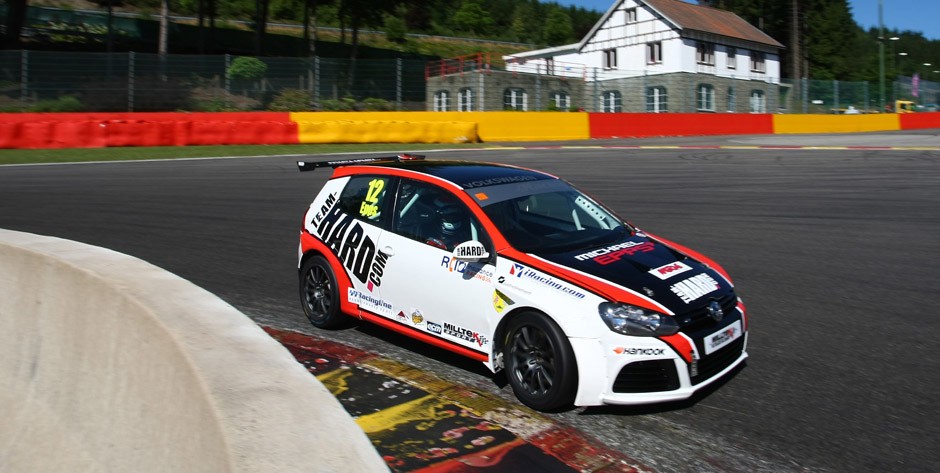 Michael Epps blitzed his Milltek Sport Volkswagen Racing Cup rivals at Spa-Francorchamps this morning to secure pole position for this afternoon’s ninth round of the championship. His Team HARD Golf GTI lapped the 4.3-mile Belgian Grand Prix circuit in 2m 44.090s – seven-tenths of a second ahead of the pack and a whopping 2.2 seconds inside last year’s qualifying best.

It was a remarkable session for Team HARD, with Epps’s team-mate Howard Fuller second quickest and Bobby Thompson a season-best fourth overall. There was a promising showing also for BTCC racer Andy Wilmot, seventh fastest in the new Team HARD Passat.

“It’s a bit fast here today,” said Spa first-timer Epps. “Spa is one of those tracks which suits me. Brands Hatch is similar and we were testing there last week and made a few changes to the car, a lot of cornering set-up adjustments, and we found some really good improvements. The car feels really good – all credit to Team HARD – and I got an absolutely magnificent tow from Bobby Thompson too, so it’s largely thanks to him.”

Championship leader David Sutton was third quickest despite his SlideSports Scirocco carrying an extra 100kg of ballast since its May Silverstone win. David was encouraged by his performance: “I am happy with that. We can race well from third on the grid.”

Lucas Orrock, who won at Spa last year for KPM Racing, qualified fifth and was pleased also: “I won here from third on the grid so I can at least hope for a podium finish. We’ve made a big step up since yesterday’s testing, and that is encouraging, but there is no way I could find another two seconds and challenge for pole…”

Wilmot, seventh fastest, said: “I like the Passat but there is a lot more work to do on development yet. It has to be set up like a touring car and at the moment it’s not, it needs a lot more rear stability, but overall I am happy because despite the development needed we are still in the top seven.”

The first of the weekend’s two Spa races follows at 2.35pm local time.