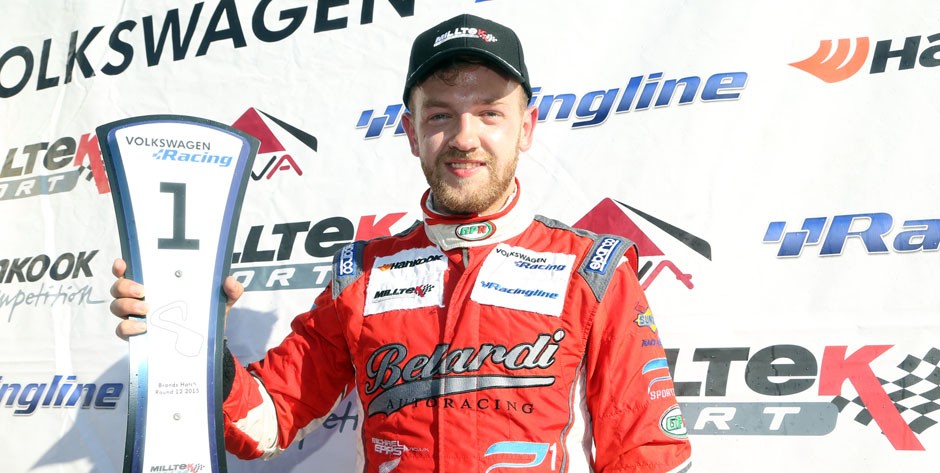 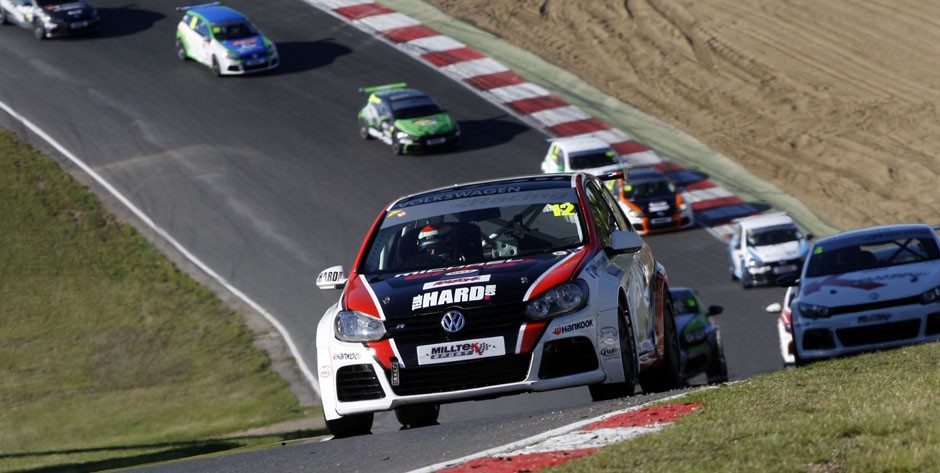 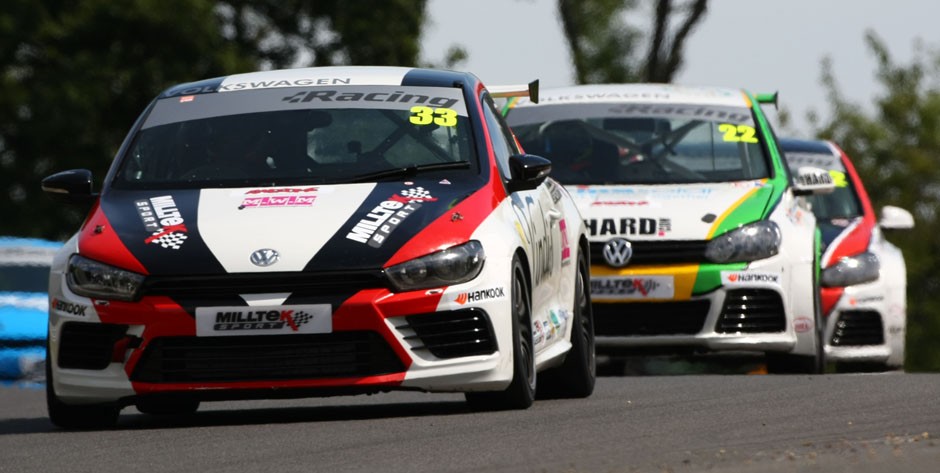 A startline shunt and a race-halting accident which befell reigning champion Joe Fulbrook put a damper on the live-televised 12th round of the Milltek Sport Volkswagen Racing Cup at Brands Hatch this afternoon, with the results declared after just three racing laps and Team HARD driver Michael Epps credited with the win.

The first drama came moments after the start lights flashed, as four cars towards the rear of the grid tangled and made contact with each other and the trackside barriers. Nobody was hurt in the incident but the stricken SlideSports Golf of Laura Tillett came to a halt in the middle of the track and the race had to be stopped while it was recovered. Three others failed to make the restart with damage: the Golfs of Simon Tomlinson and Damani Marcano and Paul Dehadray’s Scirocco.

At the restart it was Howard Fuller at the sharp end of things after a great start from P2 to outgun pole-sitter Epps into Paddock Hill Bend, with Tom Onslow-Cole’s Milltek Sport Scirocco in third and close behind the Team HARD men, and Tom’s KPM team-mate Lucas Orrock next up.

Epps snatched the lead away from Fuller on the second lap with a brave move around the outside through Hawthorns. Onslow-Cole passed Fuller later that lap at Stirlings, the move resulting in a touch and a spin down the order for Howard. Onslow-Cole said: “He half defended, so he was kind of in the middle of the track, so I took the opportunity but he came in for the apex of the corner and we made very light contact. It was a shame but one of those things.”

Fuller’s view: “I was turning left for the corner and was put in the gravel. You can see the damage to my car – it’s on the rear bumper. If it was on the door I might have said it was a racing incident…”

The scene was set for a great duel to the finish between Epps, Onslow-Cole and Orrock but a nasty crash for Fulbrook brought out the red flags once again. Joe, running eighth in the Safe and Sound Golf, hooked a wheel on the grass through Stirlings, spun wildly across the track and collected the barriers with force, his car flipping over in the aftermath of the impact. He was shaken but unhurt in the incident.

The results were taken back a lap to the third, with Epps declared the winner from Onslow-Cole and Orrock. Said Michael: “It was a short race but full of incident and I really enjoyed it. It was just a shame we couldn’t have had more time on track.”

Orrock agreed: “There was a lot going on, the restarted race was going to be shorter and I think everyone was trying to get everything done in the first couple of laps. It was a case of trying to survive and get as good a result as I could.”

Phil House claimed fourth in his Scirocco ahead of Aaron Mason, who lost ground on the opening lap, and David Sutton, whose SlideSports Scirocco was stripped of some weight for the second race and was much more rapid. “We had an overheating problem though,” said the championship leader, “and the red flag worked in our favour because I was starting to go backwards.” The top 10 was completed by Joe McMillan, Bobby Thompson, Jack Walker-Tully and Simon Rudd.