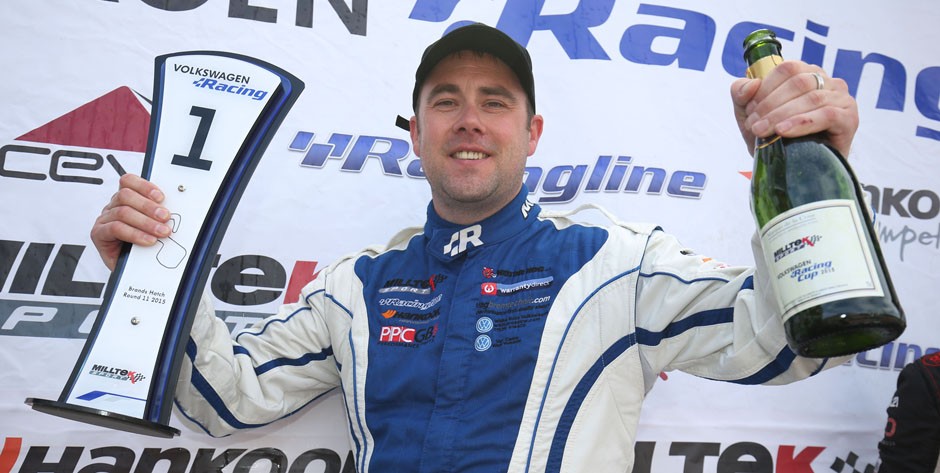 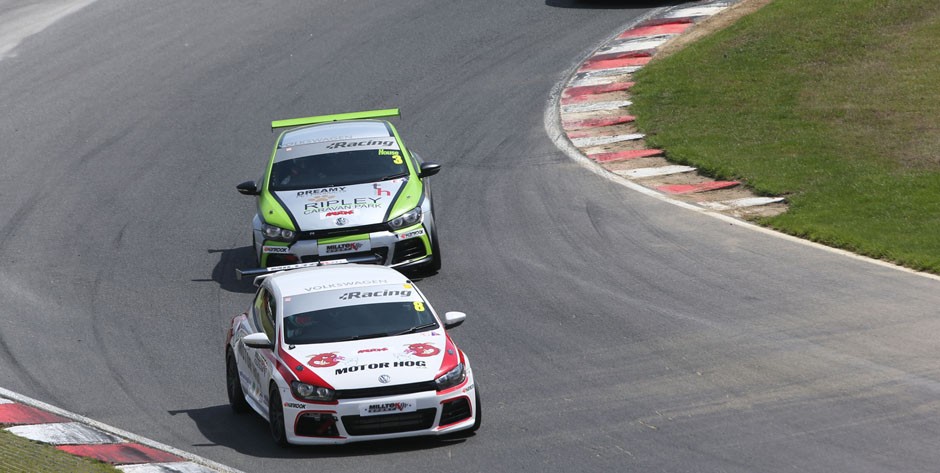 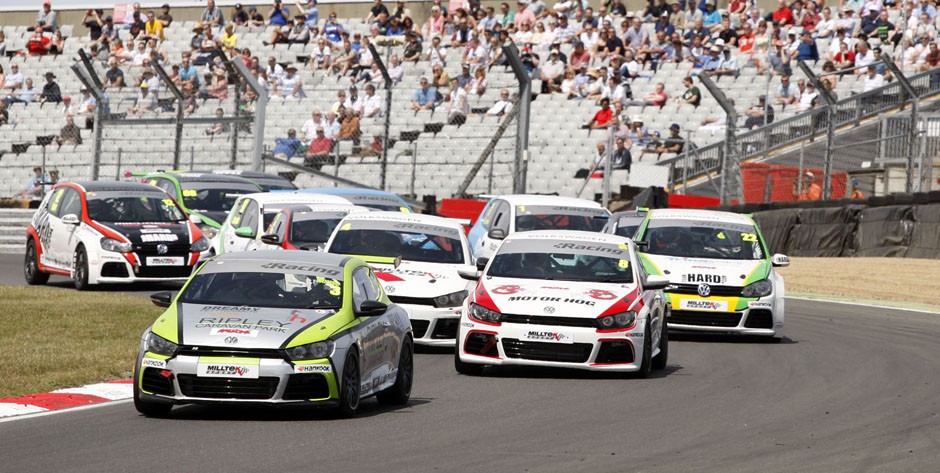 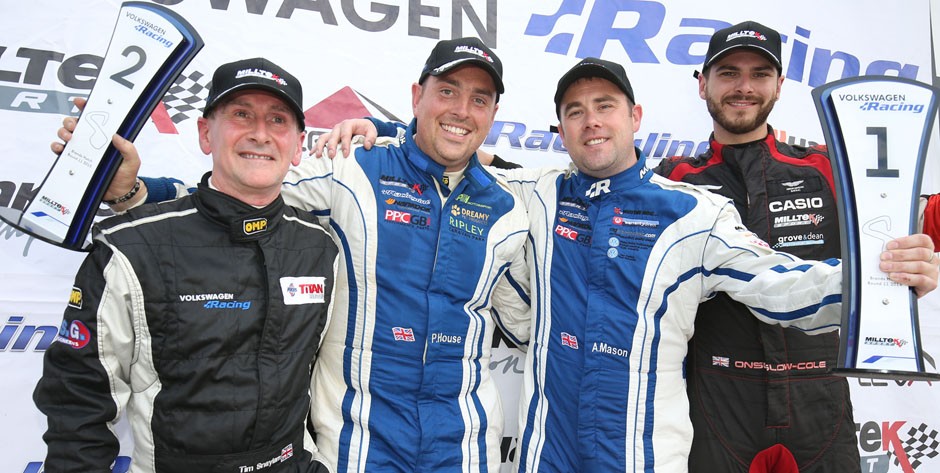 The 2013 champion, Aaron Mason, ended his Milltek Sport Volkswagen Racing Cup victory drought in fine style at Brands Hatch this morning, seizing control of the championship’s 11th round on the opening lap and holding on to record a narrow victory over Phil House. It was Mason’s first win since Donington Park more than 10 months ago, and sees him narrow the points gap between himself and season-long championship leader David Sutton.

Sutton endured a miserable race, contact early on dropping him down the order and an eventual 13th place finish, his worst result of the year.

AWM Scirocco driver Mason’s win – the 21st of his VW Cup career – was the result of a useful technical improvement made pre-event, some excellent driving and a bit of bad luck for House, who made a storming start from second on the grid to overhaul wheelspinning pole man Tom Onslow-Cole and lead into Paddock Hill Bend. Mason took advantage of Onslow-Cole’s tardy getaway also to slot into second and then passed House for P1 up Hawthorn Hill as Phil struggled with his gearstick.

“I got an absolutely brilliant start,” said Phil, “but then the gearknob just came off in my hand on the run up to Hawthorn. I managed to get it back on but it just gave Aaron a run on me and that was that. So frustrating.” It was bitter blow for House, who only recently managed to overcome a troublesome overheating problem with his PH Motorsport Scirocco which has blighted his results for 18 months.

By the end of the opening lap Mason led House by nine-tenths of a second. Phil managed to narrow the gap to 0.2s by the end of the sixth, but his hopes of regaining the lead were then dashed by a lengthy safety car period. The race was restarted after 10 laps and with a lap to run, but a defensive drive from Mason ensured he stayed ahead by a 0.6s margin.

Mason explained that his win was down to some pre-race technical checking: “We went to the rolling road on the way down to Brands Hatch and found that we were 10 horsepower down. It was a simple problem that caused it, easily fixed and it’s made all the difference. I got a brilliant start and then I saw Phil had a problem, so I took advantage. He got it sorted before the end because he came on strong again. We needed that safety car because I’m not sure we’d have made it otherwise.”

Visiting touring car star Onslow-Cole dominated qualifying in the Milltek Sport KPM Racing Scirocco but was left to rue the poor start which left him unable to secure better than third: “When you put it on pole in qualifying by a healthy margin it’s always a shame to drop back from that, but a podium finish is always good. My race went down the pan as I sat there wheelspinning on the line; it was terrible, but that’s part of jumping in a car for the weekend – you don’t get the chance to get all these things right.”

The safety car period – caused by a clash between the Golfs of Graham Ewing and Simon Andrews at Surtees on the sixth lap, which left Andrews’ car needing recovery to safety – put paid to Lucas Orrock’s hopes of a podium finish. After losing a couple of places on the opening lap, his Vindis-backed KPM Scirocco gained positions quickly and he passed Howard Fuller’s Team HARD Golf for fourth on lap five. Said Lucas: “I held back in the opening corners in the expectation there would be an incident, but it was a poor call because nothing happened. After that I had good pace and made up some places, but the safety car spoiled things – everyone drove fully defensively on the final lap, as you’d expect, and there were no opportunities.”

Orrock took fourth at the line, a second ahead of Howard Fuller, with Spa double winner Michael Epps battling through from 11th on the grid, his lowly start slot the result of a steering failure on his Team HARD Golf, to claim sixth at the line, and with it pole position for the second Brands race.

Robert Barrable placed seventh in the THM Racing, the Irish rally driver surviving a fourth-lap clash with Sutton, which cost David eight places and which also delayed Joe Fulbrook. Joe McMillan’s Cobra Engineering Scirocco set fastest lap on its way to eighth, ahead of Fulbrook’s Golf, which was further in the wars at the final corner with a collision involving the Team HARD Golf of BTCC racer Aiden Moffat, whose race ended just short of the line. Sam Edwards completed the top 10, just ahead of his Team HARD running mate Bobby Thompson, who dropped almost to last on the opening lap after boiling his clutch on the grid.

Simon Rudd took a home-track 12th-place finish ahead of Sutton, Pete Littler’s JWB Scirocco and Tim Snaylam, whose 15th position earned him the Sportsman’s Trophy. “I had a excellent race,” said Tim, “but I’d like to finish a bit higher up; I can beat the gentlemen OK, it’s just the rest of them I struggle against.” The finishing order was completed by Matthew Wilson, Simon Tomlinson, Laura Tillett, Paul Dehadray, Mark Clynes and Damani Marcano.

Jack Walker-Tully was another to suffer damage, his Cooke and Mason Scirocco retiring after a lap following contact in the pack. Darelle Wilson suffered a misfire and championship newcomer Dan Clark a blown engine.