Another Joe on top as McMillan claims his maiden win 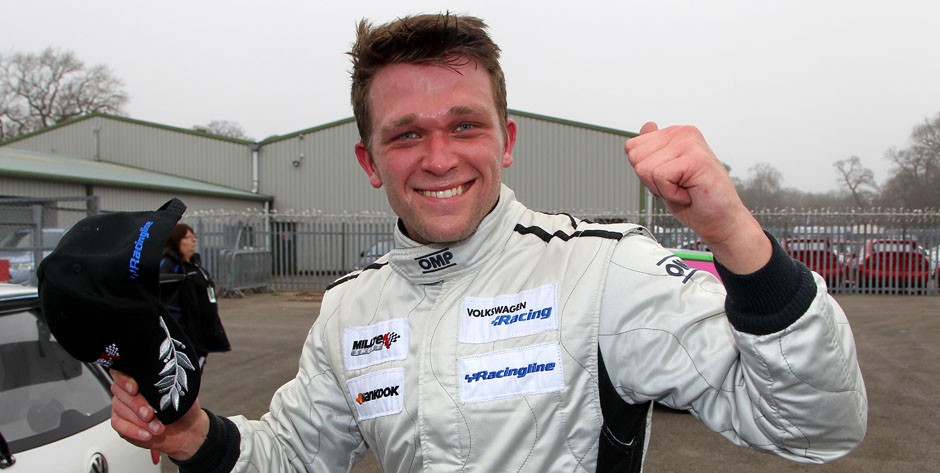 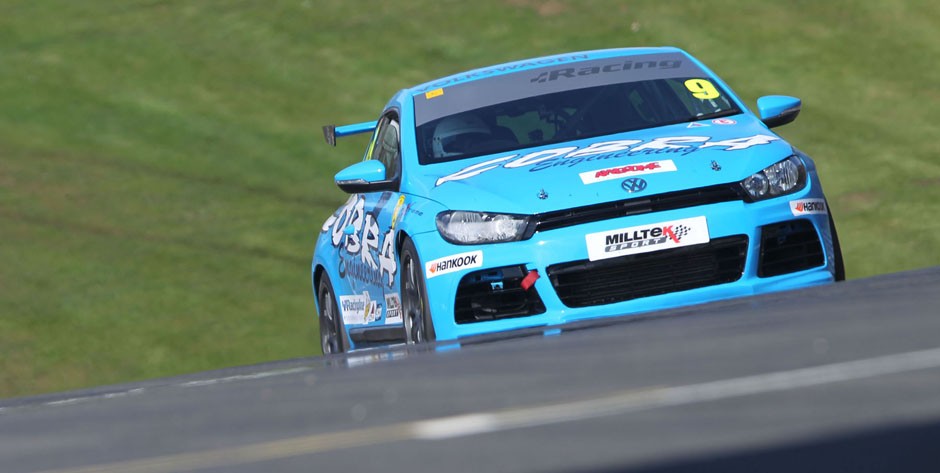 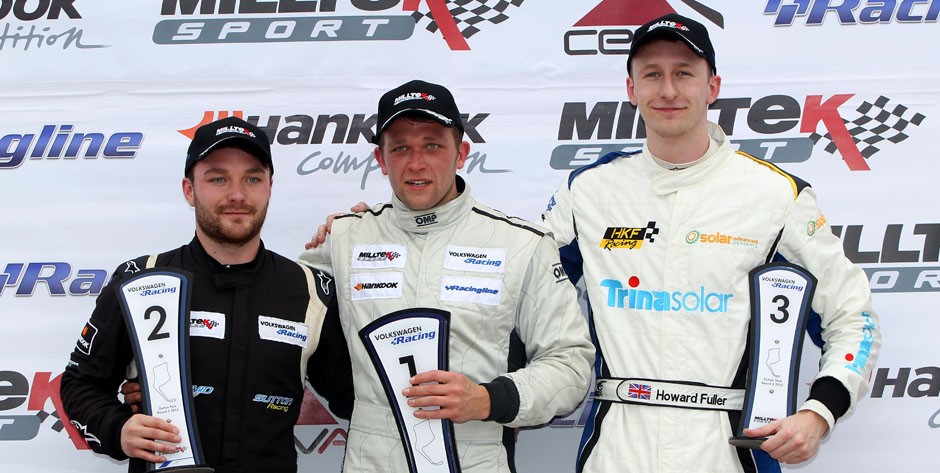 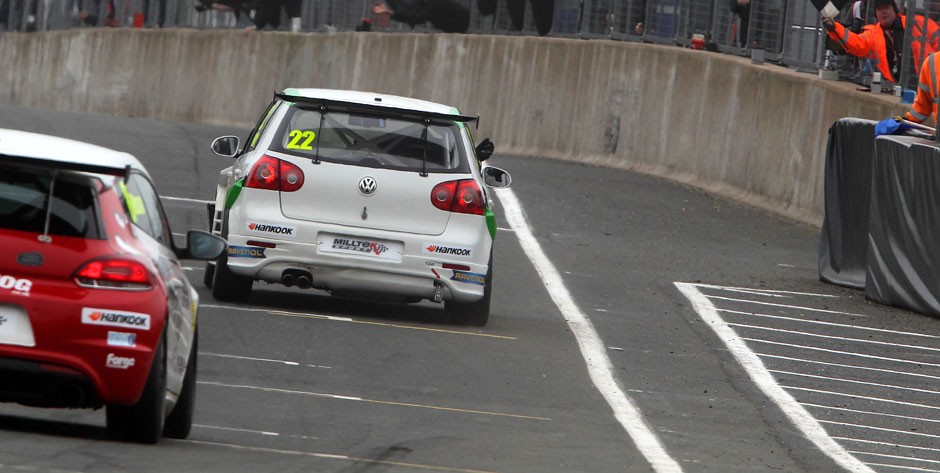 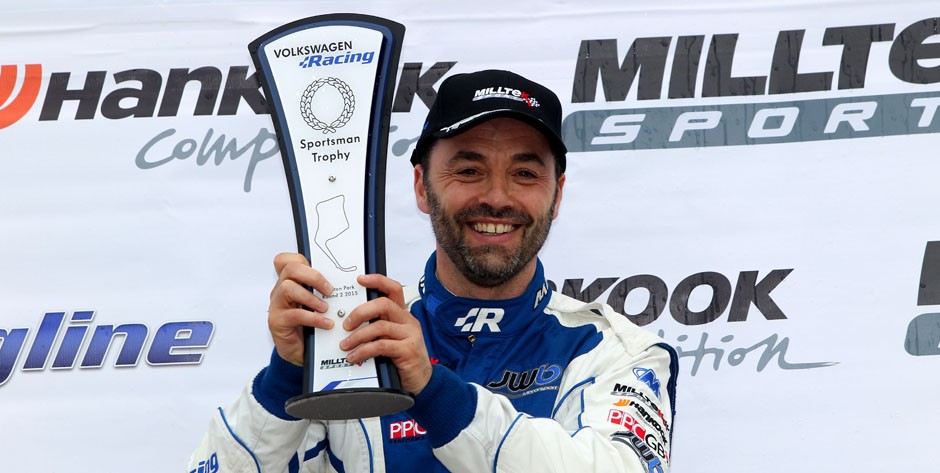 The Milltek Sport Volkswagen Racing Cup welcomed a new race winner to the fold this morning at Oulton Park, when Joe McMillan led the second round of the 2015 championship from opening lap to chequered flag in his Cobra Engineering Scirocco.

McMillan, who had scored what was his best result in the championship to date when he finished fifth in Saturday’s opening round, started from the front row alongside another Joe, reigning champion Fulbrook, in the Safe and Sound Golf GTI. Fulbrook and McMillan left the grid together and raced side by side down The Avenue and through Cascades before the senior Joe yielded the lead to his younger rival.

Fulbrook lost second place before the end of the lap to Saturday’s race winner David Sutton, who was not about to let a sixth-place starting position get in the way of his bid for another victory. By lap’s end Sutton’s SlideSports Scirocco was just a quarter-second behind McMillan and settling in to attack for top spot.

But McMillan proved more than equal to the challenge. Despite never having led a VW Cup race before he defended his position brilliantly and never let Sutton get close enough to mount a serious bid. At the flag, Joe led David by seven-tenths of a second, and Sutton was fulsome in his praise for the winner: “Credit where it’s due, he’s very good at defending. I think I had more pace than him and if I could have got by I would have pulled away from him. But fair play, he deserved that one.”

Added a delighted McMillan: “I didn’t think I was going to get the win, to be fair. David was all over me the whole race and kept the pressure on, especially in the harder-braking areas where he was a lot better than me. We’ve done a lot of testing over the winter because the best I could manage last year was to race in the mid-pack, so it’s really pleasing that it has all paid off.”

Fulbrook saw off a challenge to his third place from Lucas Orrock (KPM Scirocco), the pair touching at Lodge at the end of lap three and Orrock spinning back to 10th as a result, but Joe was powerless to prevent his AWM running mate Aaron Mason from passing him at the next corner, Old Hall. Team HARD Golf man Howard Fuller followed Mason through for fourth place shortly afterwards, demoting Fulbrook to fifth.

The position-swapping wasn’t over yet: two laps from the end Fuller got the better of Mason to secure third, Aaron complaining that the weight being carried by his powerful Scirocco was proving too much for his tyres. Fuller was pleased with his second podium finish in as many races: “It was hard work, but I’m a little happier with that podium than I was with the first. I dropped right back and had to come back through, so harder work but more pleasing.”

Jack Walker-Tully (Cooke & Mason Scirocco) got past championship newcomer Lee Allen (Maximum Motorsport Scirocco) early on to secure sixth place, Jack enjoying a much better race than he did on Saturday thanks to set-up changes. Allen took seventh ahead of Phil House, who was delighted that his PH Motorsport Scirocco ran cleanly in the cooler temperatures to allow him to race competitively for the first time this year.

After his Lodge corner contact with the barriers, Orrock was able to come back from 10th to ninth by the end, ahead of Bobby Thompson. Bobby was caught out by the chilly track conditions and found the handling of his Team HARD Golf far from ideal, but was able to stay well ahead of Simon Deaton’s Maximum Scirocco to claim the final top-10 slot.

There was a great battle for 12th and the RacingLine Sportsman’s Trophy between Mark Clynes (JWB Scirocco) and Simon Tomlinson (AWM Golf). Clynes made a great start from 17th on the grid to gain three places on the opening lap and made his move on Tomlinson stick on the seventh lap.

Michael Epps claimed 14th spot for Team HARD ahead of Matt Wilson’s Complete Racing GTI. Laura Tillett survived a grassy moment and an electrics cut-out to finish 16th in front of Paul Dehadray, Mark Smith, Peter Davies and Karolis Staniukynas. Sixteen-year-old Damani Marcano was the final finisher for Team HARD, delayed by a spin early on and a turbo pipe problem in the latter stages. Simon Rudd spun off after contact with Mark Smith and he was joined in retirement by Cameron Thompson and Pete Littler.