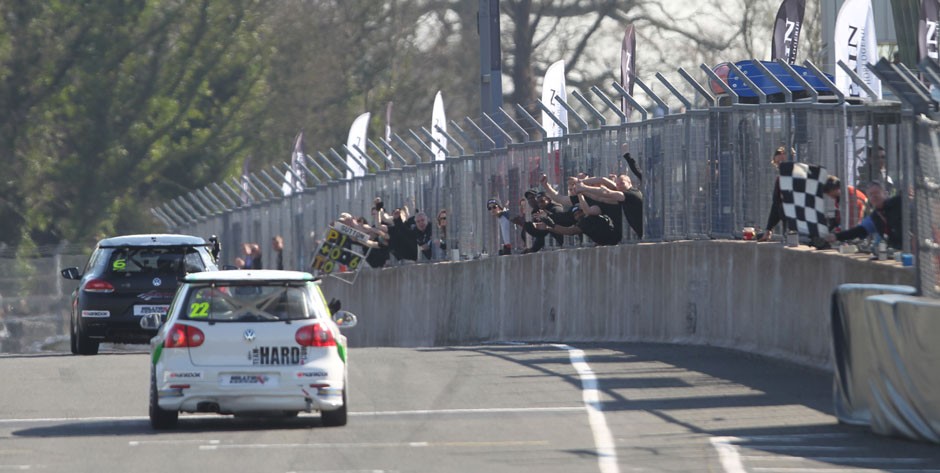 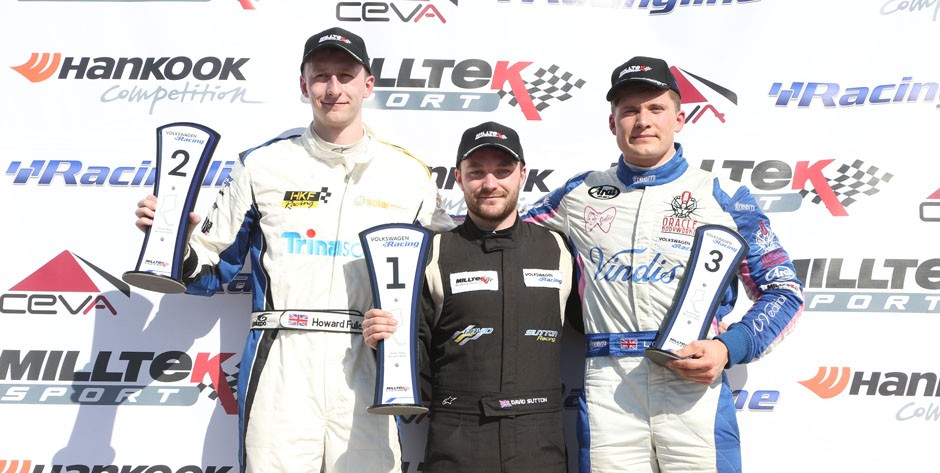 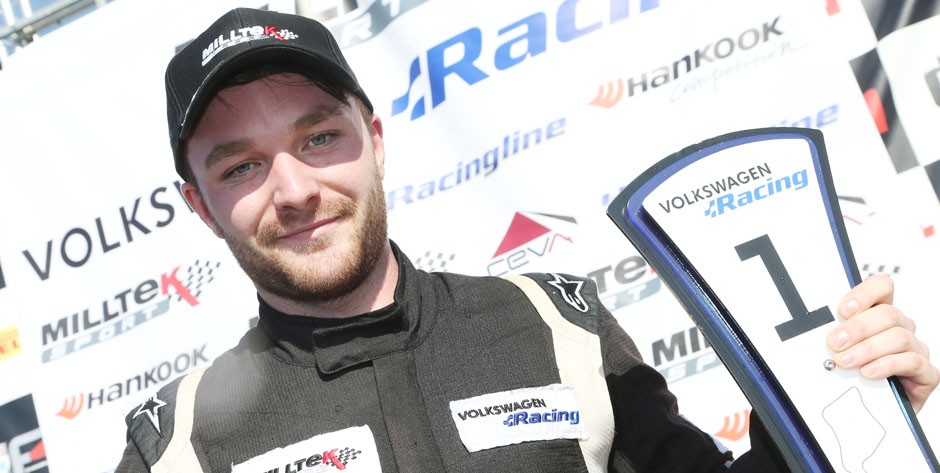 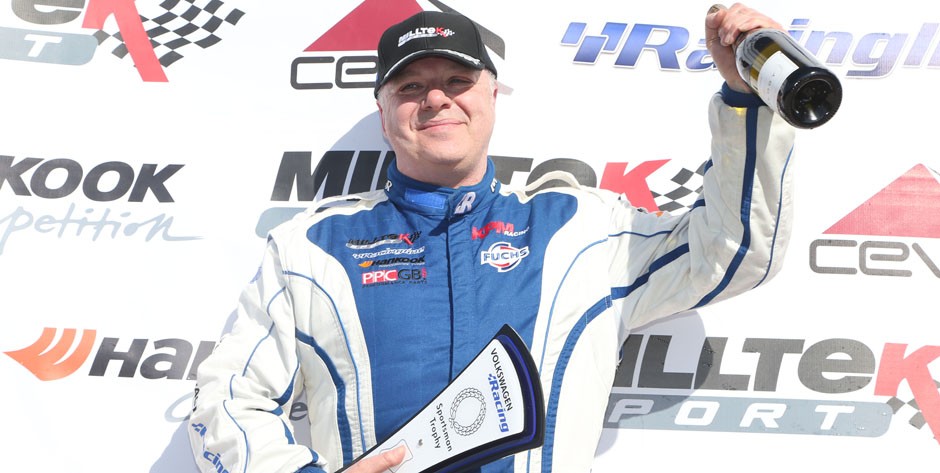 Just as he demonstrated in Saturday’s first round of the Milltek Sport Volkswagen Racing Cup, David Sutton and his SlideSports Scirocco were on perfect form for the start of the season and for Oulton Park. In a carbon-copy performance, the 24-year-old from Rotherham started round three from pole position, made an impeccable getaway to the race, and led all the way to the chequered flag to earn himself a handsome championship lead.

On this occasion it was Howard Fuller who kept Sutton honest. Howard’s Team HARD Golf started alongside Sutton from the front row and slotted neatly in behind at the start and kept within range throughout – at its largest the gap between them was just 1.4 seconds. Fuller held station, hoping for a mistake, but none came.

“It’s the perfect end to a nearly perfect weekend,” said victor Sutton, who struggled financially to get to the opening rounds, “and fantastic points for the championship… Hopefully it will help me to find some sponsorship so that I can come back at Rockingham and defend my lead. To be honest, unless someone comes forward to help then I won’t be there…”

Fuller, who was involved in a serious crash at Oulton Park at the start of 2014, was far from disappointed not to have been able to find a way past: “Considering that last year I left this circuit in an air ambulance, I’m well pleased with my weekend. It was great to be able to stay on terms with David and to prove that the Golf can be competitive against the Scirocco; there were one or two occasions when I could have had a go at him but I thought better of it. I am quite happy to take two thirds and a second from the first three races.”

Lucas Orrock held third throughout the race, and a lonely finish it was for the Vindis-backed Scirocco, 11 seconds behind the leaders and 5.5s in front of the pursuing Aaron Mason. Said Lucas: “You could see from the off that we didn’t have the pace to compete with the front two. We’ll have to go away and see why that is… I decided there was no sense in pushing: I had a good gap to Aaron and so it was a case of backing off 10 per cent and staying where I was.”

Mason’s AWM Scirocco, which started fifth, passed Phil House’s PH Motorsports Scirocco for fourth after three laps but was unable to make a dent in Orrock’s lead over him. House came home fifth for his best finish of the weekend, ahead of the Safe and Sound Golf of Joe Fulbrook and with championship newcomer Lee Allen seventh for the third race in succession for Maximum Motorsport.

Young guns Jack Walker-Tully and Bobby Thompson finished next up, with round two victor Joe McMillan classified 10th. Joe would have finished higher up the order but for a 10-second penalty imposed for an out-of-position start. Former single-seater racer Michael Epps claimed 11th, his best finish for Team HARD during the Oulton Park weekend.

Twelfth, and a delighted recipient of the RacingLine Sportsman’s Trophy at his home circuit, was KPM racer Philip Morris: “I’m very pleased: I got my racing licence at 50, and this is my first trophy after five years of trying. I’m pleased to have done it properly and won the trophy by finishing well ahead of all the other eligible drivers.”

Pete Littler, who failed to make the start of round two after his JWB Scirocco suffered gearbox problems, came home 15th, behind the Golfs of Laura Tillett and Simon Tomlinson, with Team HARD running mates Simon Rudd, Peter Davis and Karolis Staniukynas completing the finishing order.

It was a race of attrition for many: Mark Smith and Paul Dehadray were among the retirees after they tangled at Old Hall on lap six, and Simon Deaton removed himself from the race with an off at Shell on the eighth lap. There were further mechanical woes for the youngest competitor, Damani Marcano.

The most disappointed driver at Oulton Park was Simon Andrews, whose Golf was badly damaged in a startline shunt on Saturday. Despite the best efforts of many willing hands from the paddock, it proved impossible to restore the wheelchair-bound racer’s car to full health in time to make the grid today. Said Simon: “I’m totally gutted but I want to thank everyone from the KPM team, who gave their time and spare parts to try to get us out there. It wasn’t to be, but it reminded me of the real spirit of this championship and why I love racing in it.”