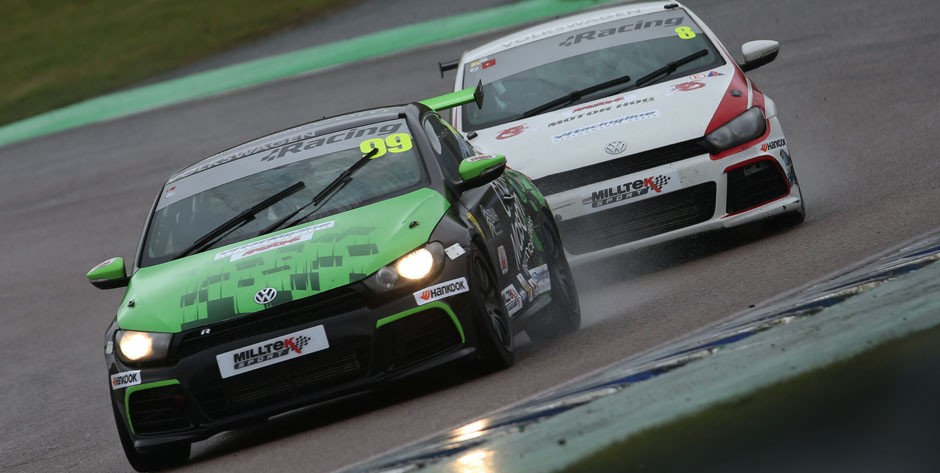 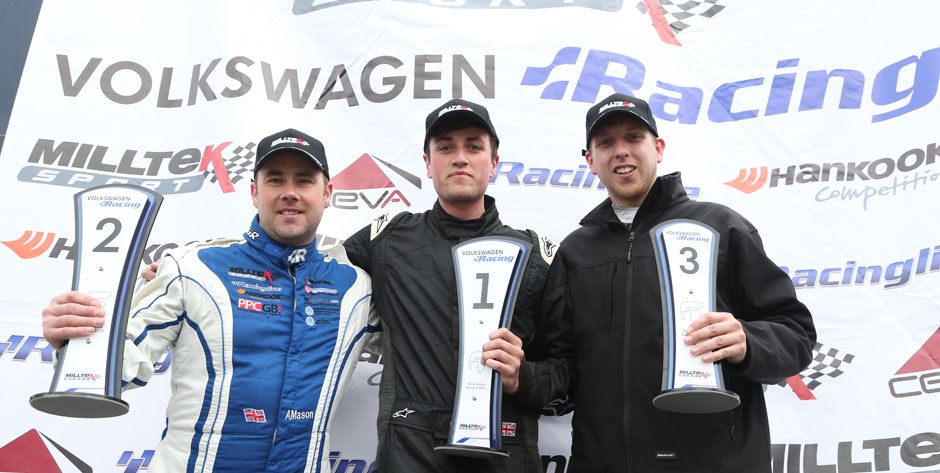 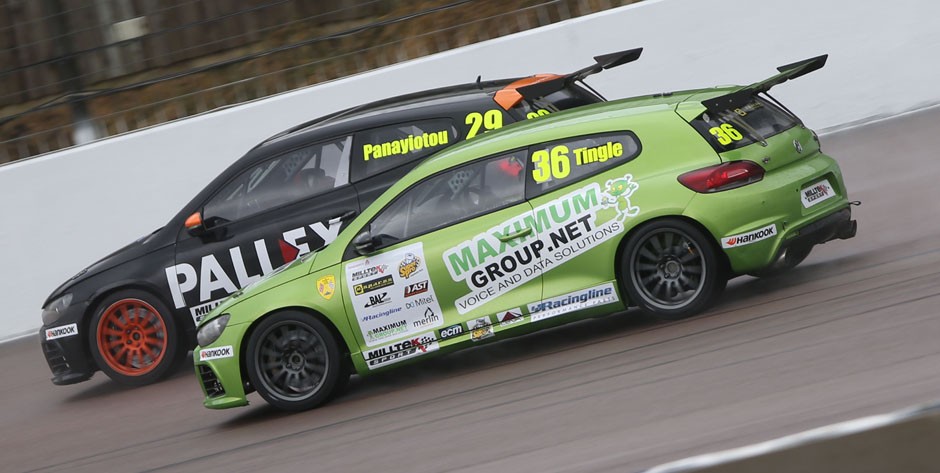 There were a lot of factors working against Jack Walker-Tully this morning at Rockingham – not the least of them that he would start the fifth round of the Milltek Sport Volkswagen Racing Cup from eighth on the grid in a car he had barely driven, let alone raced, in wet conditions. Yet despite the handicaps the 22-year-old from Nottingham came through to score a notable victory, his first win in any form of motorsport, to add his name to the VW Cup record books alongside those of his cousin, James Walker, and uncle Richard Walker.

It was a masterly drive in treacherously wet conditions which caught out more than a few, not least championship leader David Sutton, and Jack’s victory margin – 6.3s – was the widest of the season so far.

Walker-Tully’s decisive opening lap laid the foundations for victory, Jack battling through to fourth after a demon start in the Cooke and Mason Scirocco. Next time around he despatched pole-starter Chris Panayiotou’s SlideSports Scirocco to move into third, on the tails of Sutton and former champion Aaron Mason. Mason, who started P3, had taken the lead on the opening lap into Deene but found his AWM Scirocco’s wet-weather set-up had no answer to the superior handling of Sutton’s SlideSports car when David attacked for the lead, again at Deene, on lap two.

Sutton was beginning to look set for a third straight race win until he locked up into Deene at the start of the fourth lap, handling top spot back to Mason: “I don’t know what happened,” said David. “I braked in exactly the same spot as the previous laps, the pedal went ‘long’ and I locked up and went straight on…”

Mason and Walker-Tully crossed the line side by side at the end of the fourth, with Jack hugging the inside line to give him the edge into the first chicane, where he made the move stick and started on the job of increasing his advantage lap by lap and securing the win.

“The car just felt amazing,” said Jack. “I got a good start and people kept falling off in front of me and then I managed to get Aaron down the straight. I couldn’t ask for anything more from my first race in the wet… I was hoping for rain because I thought we could go well. Three laps from the end I was just coaxing it to the end and praying it wouldn’t let me down.”

Mason was more than happy with his second P2 finish of this season: “We set the car up a bit too soft for the conditions so as soon as the track started drying Jack had the upper hand and it wasn’t worth pushing. It didn’t help that my windscreen wiper packed up half-way through. But second means good points, so I’m pleased.”

After a strong showing in his maiden VW Cup race yesterday, Jason Tingle recovered from a tricky opening lap, which saw him drop from second on the grid to fifth, to claim third at the flag for Maximum Motorsport. “I had a few moments, but then I’ve never raced this car before this weekend, let alone in the wet,” said Jason. “I came here hoping for a top 10 finish and never expected a podium, so I’m happy and so is the team.”

Sutton’s fourth-lap error cost him three places and David exercised caution with his braking for the rest of the race to bring the Scirocco home fourth ahead of the cars of Lucas Orrock and Joe McMillan, with Phil House making good progress from 11th on the grid to seventh by the end.

Michael Epps scored his best result of the season so far with eighth, just ahead of his Team HARD running mate Bobby Thompson. Reigning champion Joe Fulbrook had been on for eighth but spun away two places two laps from the end when he outbraked himself. “We didn’t have a wet race all last year,” said Joe, “and we had to guess at the settings. They weren’t perfect but we at least gathered some good data.”

After retiring yesterday Howard Fuller started from dead last on the 28-car grid and made it through to 12th by the third lap. He lost a place thereafter as the result of a misunderstanding with his HARD team-mate Bobby Thompson but brought his Golf home 11th, behind Fulbrook. Said Howard: “A suspension joint got knocked out, which meant the Golf handled like a shopping trolley, but I needed to stay out and score some points.”

From pole to 12th, Panayiotou’s drive was a disappointment, put down to having completely the wrong set-up for the conditions and brand new wet-weather Hankooks. Darrelle Wilson followed Panayiotou home for 13th, with Simons Rudd and Deaton completing the top 15.

Graham Ewing (SlideSports Golf) led the Sportsman’s Trophy runners early on before a spin dropped him down the order. Deaton went on to collect the cup, and said: “It’s a long time since I’ve driven Rockingham in the wet and I’d forgotten how slippery it was. So I just took my time and I didn’t even know I’d won the class until I’d finished.” Ewing finished close behind for 16th overall.

Paul Ivens (Maximum Scirocco) and Karolis Staniukynas (Team HARD Golf) fell by the wayside with mechanical problems; Phil Morris (KPM Golf) was the other non-finisher, ending his race in a tyre wall after a fourth-lap spin.