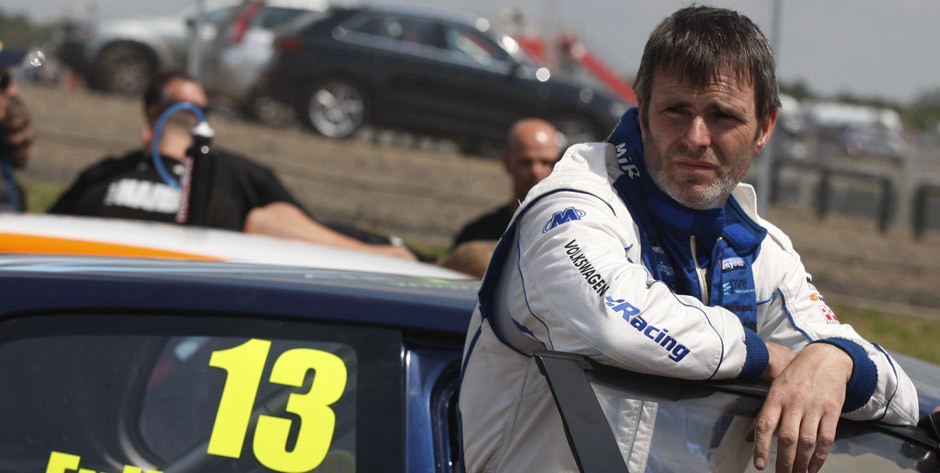 Reigning champion Joe Fulbrook is to return to the Milltek Sport Volkswagen Racing Cup looking to claim the championship title for a record fourth time – and he has two new weapons in his armoury to help him achieve his goal.

Under the bonnet of Fulbrook’s multiple race-winning Golf GTI this season will be a new 2-litre turbocharged engine, and on the bonnet will be the logos of his team’s new partner, Safe and Sound – the flagship used car warranty scheme from the WMS Group.

Fulbrook will once again join forces with his 2014 team-mates Aaron Mason, Simon Tomlinson, Robin Riley and Simon Andrews, and is enthused about the coming season, which gets underway at Oulton Park on 4 April:

“The team at RP Motorsports and ST Engineering have been working very hard to make some substantial changes to the car. Every year we try to introduce something new and this year is no exception: we will have a new engine, which will hopefully rid us of the reliability problems which robbed us of a few race wins in 2014.

“We have all been doing this a long time now but we are all still keen for success, and hopefully all our winter work will prove fruitful. The VW Cup is a very different and more competitive series now than when we started out in 2005. Our results over the years show that we have been able to adapt to change, and we are hoping this year will be no different.”

Fulbrook’s maiden season in the championship with a Bora in ’05 was his first foray into any form of racing, and he was soon rewarded with his first win. He won the championship in 2008 and ’09, and regained the crown last year after switching from Bora to Golf power.

“I am delighted to be bringing a new sponsor to the sport,” added Joe. “Safe and Sound is a seven-element scheme which includes an unrivalled wear and tear car warranty, rigorous safety inspection, provenance check and much more. It is also endorsed by Sir Stirling Moss.”

Among Fulbrook’s chief rivals will be his team-mate Mason (Doncaster), who won the crown himself in 2013 with a Scirocco and who last year claimed more race victories – four – than any other driver. “Aaron will be a tough but fair rival,” said Joe, “and we will both profit from sharing data and know-how. I am very pleased also to be racing again with Simon Tomlinson, Robin Riley and Simon Andrews, and both Aaron and I look forward to helping them move further up the grid during the coming season.”

Doncaster-based Tomlinson is entering his fourth season in the championship with a Golf GTI while Scirocco driver Riley (Milton Keynes) will be starting his seventh season in the series. Disabled racer Simon Andrews (Liphook) returns with his distinctively liveried ‘polizei’ Golf GTI looking to return to the form which brought him ninth place overall in the championship in 2012.

With backing from Bluelite Graphics and Volkswagen retailer White Rose Petersfield, Andrews is hoping for a strong showing in the new-for-2015 RacingLine Sportsman’s Trophy. “Unfortunately recent operations left me needing more recovery time than first anticipated, but I have been working on my fitness over the winter months with the aim of returning to the level I was at in the championship in 2012,” said Simon. “The pace this season is going to be hot among us disabled drivers and I need to be on top form.”

The first meeting of the Milltek Sport Volkswagen Racing Cup season is early next month at Oulton Park in Cheshire – qualifying and the first race of the weekend are set for Saturday 4 April, and there will be a further double-helping of race action on Easter Monday, 6 April.